Ever since I was little, I’ve loved two things: Broadway and books. Why? Because I loved delving into a world and dissecting the different characters to figure out their actions and what makes them tick so I could better understand them. I love stories (true or fictional!) and the ability they have to connect and resonant with different people. As I look back, I realize I’ve always looked up to and connected with strong female characters. These characters were the outliers, girls who were different and dared to think and dream differently than everyone else. What drew me to these different characters was that I saw parts of myself in them. I felt like I could relate to their situations and their thought processes. As I analyzed each character, I learnt from them and what I learnt helped me grow as a person. Below, I have chosen a few of the characters that have had a long lasting impact on me and how old I was when I grew up with them.

Laura Ingalls Wilder – 8-11
I’m pretty sure Laura was the first female protagonist that I looked up to. She was bold, brave, spunky and wanted to play by her own rules. I admired how loyal she was and how she was more than willing to speak her mind. I think the best part of her character was how she was imperfect. I felt like that made her even more relatable as a character. I like how she constantly pushed the boundaries of convention and how she strove to improve and keep challenging herself.

For one Christmas, I got a huge stack of books about the real Laura which I promptly devored. I even got to see the Little House On The Prairie musical when it came to town. A friend of my mom’s made me a bonnet and I thought it was the coolest thing. I still have it. Katniss Everdeen – 11-13
At the end of my Little House on the Prairie obsession, I discovered the Hunger Games and was fascinated by Katniss. Actually, I read the first book when I was nine but wasn’t impressed. For some reason, it wasn’t my cup of tea at the time. The second time around, I was drawn to her strength and tenacity. She was willing to go the distance to protect the people that she cared about. Like me, she didn’t let a lot of people into her inner circle but the ones she allowed in she fiercely loved and protected. She was resilient and refused to let anything or anyone change her. I loved how she didn’t care what anyone thought about her. She had her own set of morals and rules and she refused to compromise no matter how difficult the situation was.

Katniss was the one who initially got me to like the color green. It’s still my favorite color. I also tried archery because of her. My mom, a friend, his mom, and I saw the first movie together and I absolutely loved it… I said every line with each character for the entire film. 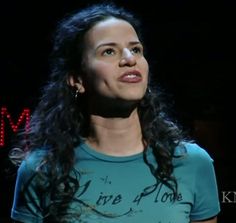 Nina Rosario – 14-17
Nina Rosario is a character from a musical called “In The Heights.” She’s a Latina woman and the first in her family to attend college. To this day, her song “Breathe” still resonates strongly with me because I see so much of myself in her. She and I are so alike. We’re both daughters of parents who immigrated to the states. We both are hard on ourselves and have a huge fear of failure because we don’t want to let our family, friends, and ourselves down. She also struggles with the questions that I do about trying to find our identities and trying to find our place in the world as well as trying to figure out how we fit into our two cultures. Just listening to what she sings throughout the show brings tears to my eyes because I feel like she says what I feel… she understands. Here’s part of another song from the show… Nina’s lyrics are the same things I struggle with. I’m trying to learn more about my culture, I’m trying to learn Chinese, and I still don’t know where I’m supposed to be. At the end of the musical, she’s able to get some answers and choose a path for herself. I’m not quite there yet but I know that I will and everything will be okay.

In this post, I chose to focus on the characters that had made a major impact on me. Here are a few characters that deserve honorable mention: Clarisse from Fahrenheit 451, Petra Arkadian from Ender’s Game, Francie Nolan from Tree Grows In Brooklyn, Hermione Granger from Harry Potter, Tris Prior from Divergent, Johanna Mason and Clove from the Hunger Games, Annabeth Chase from Percy Jackson and Campbell Davis from Bring It On:The Musical.

Currently, I don’t have a character that I’m growing up with/ learning from but I can’t wait to find her. Each of these girls left such an impression on me and are a reminder of the importance of human connection and the power of a story.